In 1952 a committee or board was formed for the selection of Recruits for Officer Commissions in Pakistan Known as ISSB. ISSB is the Short form of Inter Services Selection Board. It is the Selection Board of Pakistan in Which Students Apply for recruitment in Forces such as Military/Army, Navy, Air Force. The recruits are selected after a long and hectic Training under the supervision of senior Army members or forces members. Inter Services Selection Board Selects its candidates for Officer Commissions. The ISSB Test Preparation Committee is supervised under a Parent organization Known as Pakistan Armed Forces. Those students, who applies for this commission, goes through a vital role of struggle, Determination and Devotion. Although the Committee only interprets to those who are worthy enough to be called a Officer in the future. More often achieve a higher rank in Forces.

What is ISSB test in Pakistan?

Inter Services Selection Board is a recruitment program of candidates for forces commission in Pakistan Army, Air Force, and Navy. This board is held for the students who have successfully succeeded in HSSC examination without any rejections or failure. If the candidate is a winner in ISSB, then he/she will be selected for officer commission. It is the opportunity for a student to begin a unique, respectful life for himself. More is to come in the future for those who are hard workers in this Field.

The Selection of recruits starts from basic Initial systems which include Initial Test, Initial Interview and Initial medical. If the 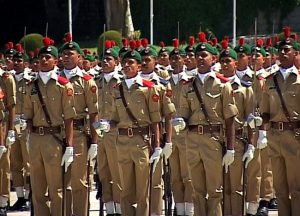 candidate is not rejected in these three initial stages, he/she move on towards the major Stage, Famously known as ISSB. ISSB is held under a controlled Lethal Environment, in which the candidates are given different tasks to work on. Those candidates who withstand ISSB training are supervised in a major Interview also known as the Psychological interview. After a complete success a trainee is hired.

To find out whether the candidate is suitable for the commission in Army, Navy and Pakistan Air force, the candidate is to be tested with Psychological Tests, Outdoor Tests. In Psychological Tests, different Sub tests are included which are; Intelligence Test, Mechanical Aptitude Test, and Personality Test. The candidates who do not Clear the Intelligence test are to be allowed to go back home on the next day of Training. Mechanical Aptitude Test is used to assess the candidate’s mechanical sense and personality test is projective type test. Outdoor Tests are Group tests which include; Group Discussion, Group Planning, Group Tasks, Command Tasks and Individual Obstacles.

ISSB Tests are scheduled on different Dates; for PMA Long Course the Scheduled dates are JAN to MAY, while for TCC (for cadets) the tests are likely to start in JULY. For Pakistan Navy Force, the test for PN Cadet Term Starts from APRIL to MAY and SSC Term Tests are scheduled From MAY To JUN. Last but not the least is Pakistan Air Force, the GDP/ 77 CAE APRIL to JUNE, non GD is Scheduled For JUNE to JUNE (Only One Month).

ISSB Eligibility Criteria for Pakistan Air Force, Army, and Navy is the same. For Intermediate the Age Limit is 17-22 years, relaxation of 3 months is Available in Upper and lower age limit). Graduate 2 year Program the age limit is 17-23 years. Graduation of 4 year program like BS/BA Hons or BBA, the age limit is 17-24 years. Intermediate students should have an annual result of at least 60% in HSSC Examination. Graduation Students who scored an annual report of 60% marks in both 2 year and 4 year programs are eligible for the work.

Online Registration for Inter Services Selection board is now available on ISSB’s Official site. The date is to be expected to announce in October till November. For the candidates who cannot go to army selection centre can easily apply for registration online. They can apply using there household internet and register for Pakistan Army, Navy or Air force with out any Queries and misconceptions.

After the Completion of ISSB Tests, The result are written in a letter and posted to the candidate’s home address via Mail. The Candidates receive this letter within 7 days/ week or 2 days more then that. The Participants are to remain patient in their future to succeed. Usually those participants who work hard and freshly manage every task in ISSB are likely to be selected for officer commission.

Call letters for Inter services Selection Board can also be checked, staying at Home by Online internet. The user or participant has to go the main website of Inter Services Selection Board and Check for the tab which says Call letter. By clicking the option the user is taken to a new page. By inputting Your CNIC Number, the Candidate checks the details for his/her call letter.

After the Test for Officer Commission in Pakistan Forces, the Candidate is to be delivered a letter which says two things; Recommended and Non Recommended. Recommended letter means that the Candidate is eligible to come to the training session and Join the Forces. Non Recommended Letter means that the candidate is rejected and is not eligible to appear in the training for forces to join. They are likely to reappear and schedule their test next year. Sometimes if the number of recommended Candidates increases from the number of vacancies then there is a chance that the candidate’s name will not appear in the final merit list even with a Recommended Letter in Hand.
Good Luck to those who apply and Best wishes for those who succeed.
Also See in this Article ISSB Test In Pakistan For Commission Officer and Preparation by Clicking on: